Use this form to share this article or news release from the Town of Miami Lakes website with a friend.
Title: Inaugural Class Announced For Miami Lakes Sports Hall Of Fame
Share!
Thanks for sharing! Your message has been sent!
Click here to close window.

The Town and its Sports Hall of Fame Committee sought nominations to honor athletes, coaches, community members and teams from the Town of Miami Lakes for their outstanding contributions or achievements in sports. The Sports Hall of Fame Committee’s recommendations were unanimously approved by the Town Council at the May 2nd Town Council meeting. The members selected to be part of the inaugural class for the Miami Lakes Sports Hall of Fame are: former Miami Dolphins coach Don Shula, former Miami Dolphins player and broadcaster Jim Mandich, former Major League Baseball player Alex Ochoa, and longtime Miami Lakes Optimist Club member Jack McCall. During its selection process, the Committee felt that each of these four individuals epitomizes the basic criteria for selection of having made significant contributions to sport and that they have substantial connections to Miami Lakes.

If interested in serving on the Sports Hall of Fame Committee or for information on induction, please visit www.miamilakes-fl.gov/halloffame  or contact Jeremy Bajdaun, Parks and Athletics Manager, at BajdaunJ@miamilakes-fl.gov 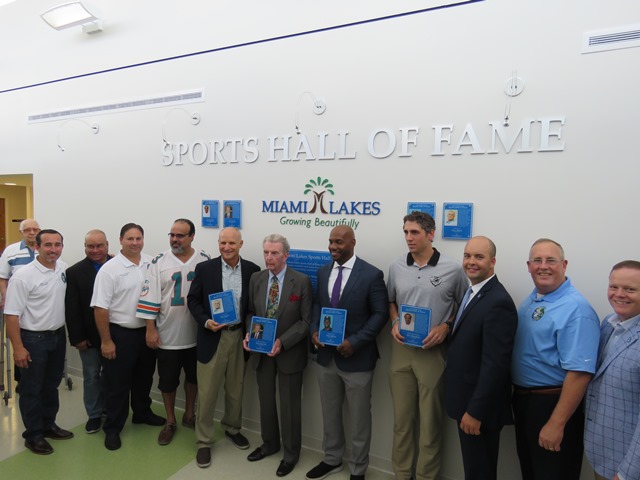