Use this form to share this article or news release from the Town of Miami Lakes website with a friend.
Title: Veterans Day Parade Grand Marshal Announced
Share!
Thanks for sharing! Your message has been sent!
Click here to close window.

Miami Lakes, FL - The Town of Miami Lakes is honored to announce Mrs. Rosa Nell Hammer and Mr. Pedro Fiallo as the Grand Marshals for the 40th Annual Miami Lakes Veterans Day Parade presented by Royal Caribbean Ltd. The Parade is taking place on Sunday, November 10, beginning promptly at 10 am. The grandstand location will be at Main Street and Ludlam Road.

Mrs. Hammer was born in Electric Mills, Mississippi Oct. 2nd, 1919, lived in a farm during the great depression. She is the oldest of 5 siblings. She graduated HS in 1937 and moved to Akron Ohio and worked as an airplane riveter on the US Navy Corsair Fighter plane in WWII. In 1943 she married AF. Master Sgt. Harvey Hammer who fought in WWII & Korean War. They had 4 children, 8 grandchildren and 6 great grandchildren. Her son Brent served in Vietnam as well. They moved from Japan to Hialeah in 1955 and has lived in Miami Lakes since 1967. She has worked in the Miami lakes area as a Realtor for the last 52 years. She is currently a member of the DAR and Gold Coast Orchid society. Her hobbies are orchid growing, stained glass art and has traveled to several countries to different orchid shows including trips to Thailand and South Africa. Mrs Hammer has a hybrid orchid species named after her "BLC Nell Hammer". At the present time, Rosa still works on Main street in the Keyes Miami Lakes Welcome Center.

Mr. Pedro Fiallo was born Havana, Cuba on June 22. 1944. At the age of 18 he married the love of his life, Zeny. Out of this union he has two wonderful children Zeny and Peter, that have given Mr. Fiallo three beautiful granddaughters Christina, Katey and Kathy and one wonderful grandson Parker James. In 1962, Mr. Fiallo migrated to the United States where he immediately joined the United States Army where served in active duty until 1963 and as reservist until 1968. In 1963, Mr. Pedro Fiallo moved to Boston, where he raised his family until 1968, when he and his family moved to Miami. Upon his arrival in Miami, he was able to buy his first home in Hialeah. During his time Miami, Mr. Fiallo became a mortgage broker and quickly became the president of loan mortgages. He also had the opportunity to work at Coral Gables Finance and then president of Capital Investors America. Mr. Fiallo was also long time State Advisor of Florida Khoury Leagues and founded the Friendship International Baseball Tournament, where his teams traveled to Japan, Mexico, Santo Domingo, Venezuela and Puerto Rico. He mentored many of baseball greats like Alex Rodriguez and Ricky Gutierrez. In 2009, Mr. Fiallo retired in the Town of Miami Lakes. Since 2016, Mr. Fiallo has been a volunteer and member of the Elderly Affairs and Veterans Committees. He hold the position of Public Relations for the American Legion Post 144 and a member of the Hialeah/Miami Lakes Republican Club serving as the Chair of Special Events. Mr. Fiallo was named Town of Miami Lakes Volunteer of the Year in 2018. Recently Mr. Fiallo was named as the Community Relations Liaison of the Hope Foundation. Mr. Pedro Fiallo is very proud to be a resident of the Town of Miami Lakes.

For sponsorship or participation information, please visit toml.eventbrite.com or contact William Sanchez at sanchezw@miamilakes-fl.gov or by phone at (305) 364-6100. 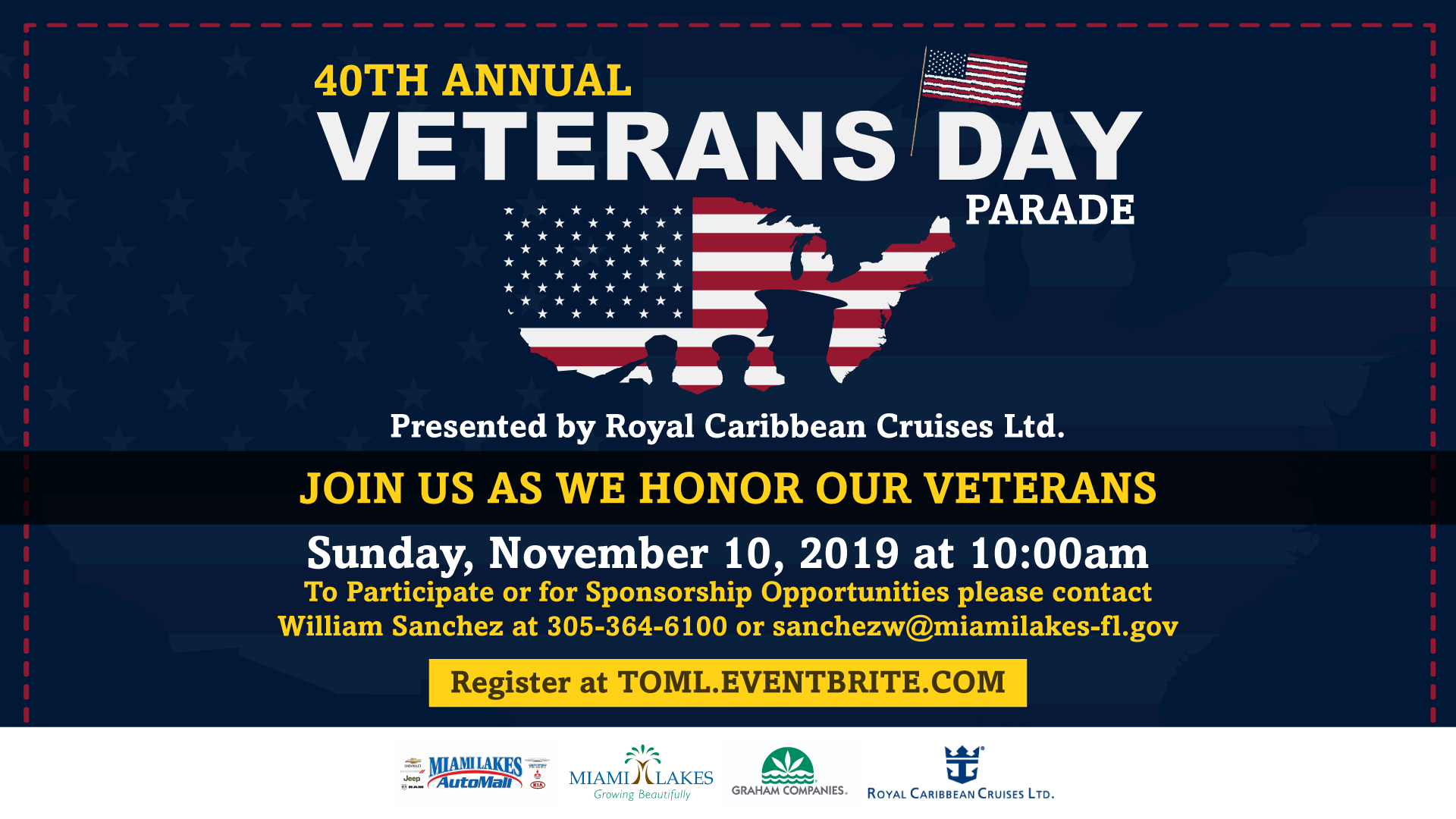