Use this form to share this article or news release from the Town of Miami Lakes website with a friend.
Title: 42nd Annual Veterans Day Parade Grand Marshal Announcement
Share!
Thanks for sharing! Your message has been sent!
Click here to close window. 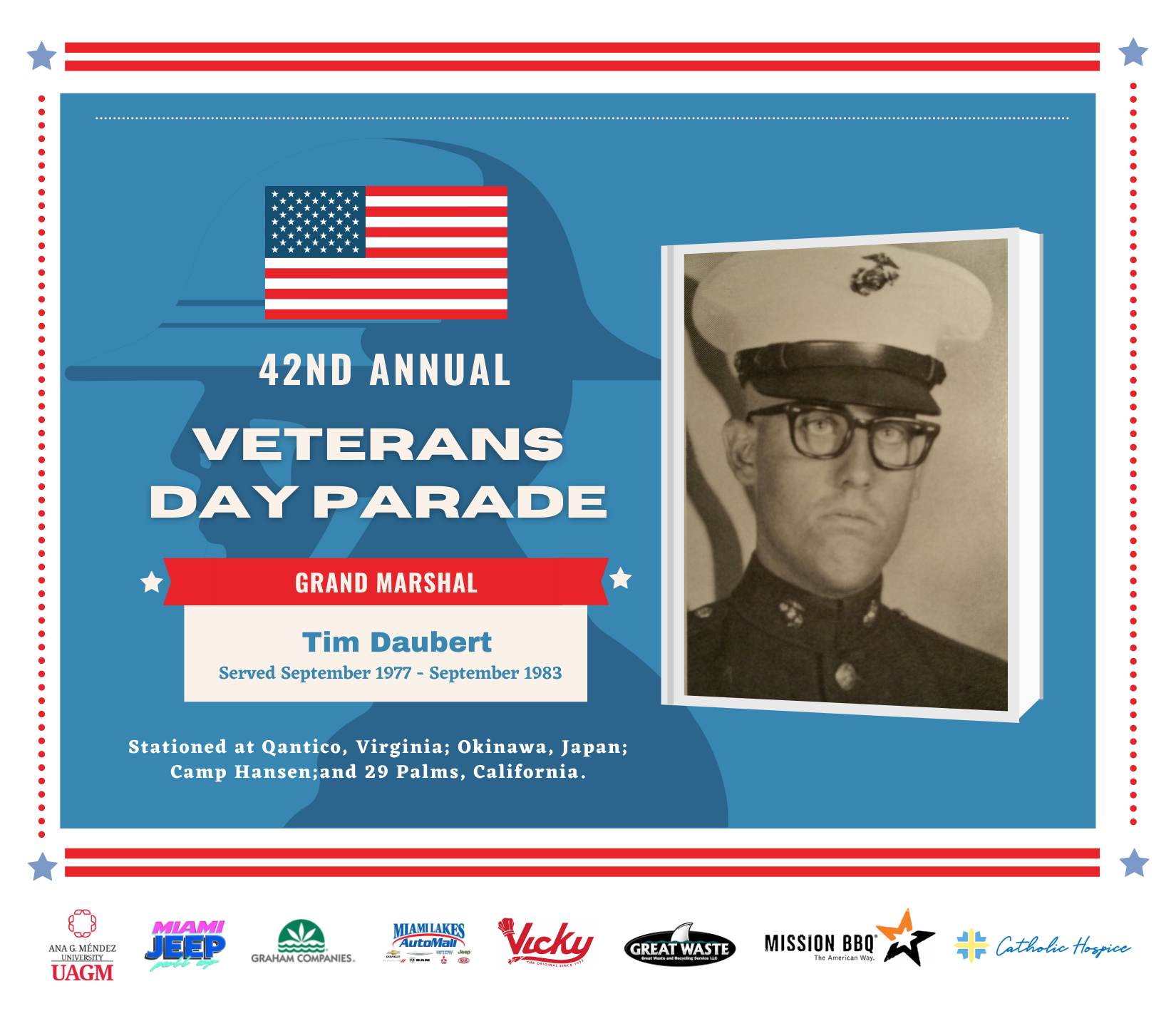 Tim Bruce Daubert was born in Pottsville, PA on October 15, 1957, and moved to Miami in 1958 where his father became a Police Officer for Biscayne Park, while his mother was a Sunday School Teacher. He joined Boy Scouts Troop 373 in North Miami where his father was a Scoutmaster, and he first became a Cub Scout, and later a Boy Scout. He is also a Brotherhood Member of the Order of the Arrow, and a life member of a service for Fraternity, made up mainly of Boy Scouts of America, and Alpha Phi Omega.

He attended Benjamin Franklin Elementary School in North Miami, and Westside Junior High School, and graduated from Central High School in 1975. He attended Miami Dade Junior College from the spring of 1976 through the fall of 1977.

Tim volunteered to serve in the United States Marines during the Granada and Lebanon war conflicts, from September 26, 1977, to January 15, 1983 when he was honorably discharged with the rank of Corporal E-4.

He was assigned to the 3rd Battalion for his Boot Camp training at Parris Island, SC in January 1978, and graduated in April 1978. In July 1978 he was transferred to Fort McClellan, AL for Military Police Training, and upon completion he was reassigned to the Marine Corps Development and Education Command at Quantico, VA where he graduated in October 1979.

Upon completion of various courses in Military Police training and Traffic Accident Investigation in November 1979, Tim was qualified to serve as a member of the Marines Military Police force and was immediately assigned to Headquarter Battalion, Company B, MCAGCC, where he served as a Military Policeman for over three years, which included a one-year tour at Camp Hansen in Okinawa, Japan serving as a liaison between the Japanese Police and the Military Police until September 1983. Upon completion of his assignment, he was transferred to Twenty Nine Palms, CA. for his release from Active Duty.

As a dedicated public servant, Tim served two terms as a Councilman for the Town of Miami Lakes, and was termed out in November of 2018, when he was serving as Vice Mayor.

Tim is continually involved in community projects, and events in support of our military and our fellow Veterans. During the government shutdown in January 2019, the members of Homeland Security, were not getting paid. At that point, Tim as a Vice Commander of the American Legion Post 144 in Miami Lakes organized a canned food drive, using Town Hall and Miami Lakes Auto Mall as collection points. After the collection was completed, he along with other members of the Post and volunteers delivered a large truck filled with canned good, nonperishable foods, pampers, etc. to the Coast Guard Air Base in Opa Locka.

Tim’s dedication to duty and service to our Country resulted in him being awarded the Good Conduct Medal, the National Defense Service Medal, and a letter of appreciation from his former Commander.

When you think of dedication and service to the community, and to our Country, Tim has definitely followed in his family’s footsteps. Here is proof of their dedication:

His Mom, Sue Daubert and Dad, Tom Daubert served in the Air Force.

From his mom’s side of the family, two of his uncles are Army Officers, plus a cousin who is also an Army Officer.

From his Dad’s side of the family, two of his uncles are both Air Force Veterans who served in Vietnam.

His brother-in-law is a retired National Guardsman, and Air Force Veteran of 20 years.

Tim is happily married to his lovely wife Cathy, and they have a daughter, Ashley, and their Dog Belle.

Across the span of forty-plus years, the Town of Miami Lakes has saluted Veterans with the longest-running parade in all of Miami-Dade County. This year, the Town will host its 42nd Annual Veterans Day Parade on Sunday, November 7th starting at 10 AM along Ludlam Road. This patriotic parade features more than 3,000 participants including active-duty and retired military, veterans’ groups, local high school and middle school marching bands, JROTC units, and more! If you or your organization is interested in participating in the 2021 Veterans Day Parade, please visit https://forms.gle/ht3EHGbGrNJpKsY68.