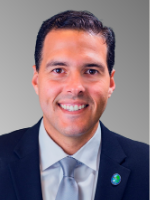 Councilman Jeffrey Rodriguez has been a Miami Lakes resident since 2009. Born and raised in South Florida, Jeffrey grew up in neighboring Hialeah.

Jeffrey graduated high school in 2001 from Hialeah Senior High, where he played baseball and was a Senior Captain on Hialeah High’s first-ever State Championship Baseball Team. He received his Bachelor’s degree in Business Administration from Nova Southeastern University, where he continued his baseball career as a four-year starter and Senior Captain and was awarded the Collegiate All-American Scholar Award for academic excellence by a student-athlete.

After graduating from Nova Southeastern, Jeffrey attended St. Thomas University School of Law. While at St. Thomas, Jeffrey received three unique opportunities to experience life in public service. He was selected to serve as a legal intern with the United States Department of Justice in the Civil Division of the U.S. Attorney’s Office for the Southern District of Florida. Jeffrey also had the privilege to serve as a Judicial Law Clerk for The Honorable Richard J. Suarez in the Florida Third District Court of Appeal. Finally, during his third year of law school, Jeffrey served as a Certified Legal Intern in the Appellate Division of the Miami-Dade Public Defender’s Office.

Jeffrey is a partner at the law firm of Adams Gallinar, P.A., where he specializes in transactional law including, without limitation, residential and commercial real estate, corporate mergers and acquisitions, real estate lending, and other complex commercial transactions.

In November 2018, Jeffrey Rodriguez was elected to the Town of Miami Lakes Town Council and is currently serving his first term as a Councilman.

Jeffrey Rodriguez and his wife Gisela are high school sweethearts and were married in 2008. They have two beautiful children, Ava and Alec.