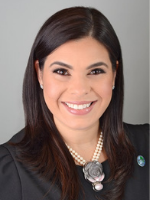 In 1997 when my husband, Anel, and I were married, Miami Lakes became our home. Twenty years later, we couldn’t be happier with our decision. We currently reside in Royal Palm Estates where I have served as the HOA president since 2013. Our 15-year- old son is completing his freshman year at Barbara Goleman Senior High School.

A Florida Atlantic University graduate, I earned my Bachelor’s Degree in Science majoring in Accounting in December 2000 and went directly into private practice. Relocating both of our businesses to Miami Lakes in 2004, I truly understand what it is to live, work, and play in Miami Lakes. We ❤ Miami Lakes…

Passionate about children and their education, I found my way into public service in 2007 when my son was first enrolled at Bob Graham Education Center. Over the years, I volunteered and served as treasurer of the Bob Graham Education Center PTSA from 2007 to 2013, President of the Civic Engagement Academy Bobcat Law Society from 2014 to 2016, board member of the Bobcat Student Council from 2015 to 2016, Educational Excellence School Advisory Council parent representative from 2015 to 2016 and currently serves on the Wellness Advisory Committee for Miami Dade County Public Schools representing School Board Member Ms. Perla Tabares Hantman.

In 2014, I was afforded the opportunity to serve the Town of Miami Lakes when I was appointed by then councilmember Manny Cid to the Town of Miami Lakes Educational Advisory Board where I served as Vice-Chair. Securing funding for tutoring, classes, and much needed educational programs at our local area schools, and promoting and encouraging a love of reading at an early age has made this a very fulfilling experience.

With over a decade of community service, including regular attendance at Town Council meetings, I voiced my concerns on matters affecting the future of Miami Lakes. I look forward to serving my community for many years. The past 10 years have been very rewarding and I know, in my heart, that the best is yet to come.